Read a full recap of the game on BabsonAthletics.com »

"The Babson community is proud to celebrate and congratulate the Babson men's basketball team—the new NCAA Division III National Champions," said Babson President Kerry Healey. "It has been an incredible season for the Beavers and we are thrilled to see hard work, dedication and talent rewarded with a national title—the first for Babson men's basketball! This team is made up of impressive scholar athletes who are leaders both on and off the court, and we are so excited to celebrate this achievement with our entire campus community."

Babson faced Augustana in the Division III national title game on Saturday, March 18 at 6:07 p.m. at the Salem Civic Center in Salem, Virginia, after a stunning victory over Whitman College in the Final Four. The Beavers rallied from a 25-point deficit to earn a win over top-ranked and previously unbeaten Whitman. 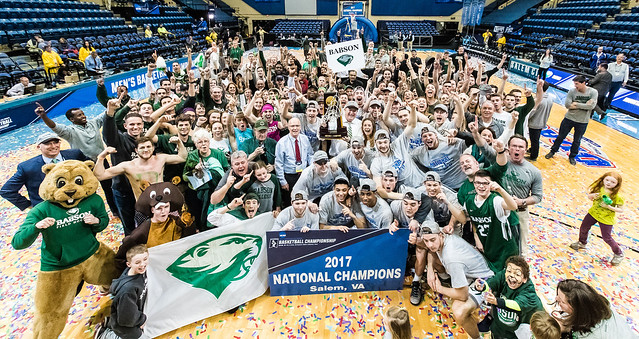 Babson College is the educator, convener, and thought leader for​ Entrepreneurship of All Kinds®. The top​-ranked college for entrepreneurship education, Babson is a dynamic living and learning laboratory where students, faculty, and staff work together to address the real-world problems of business and society. We prepare the entrepreneurial leaders our world needs most: those with strong functional knowledge and the skills and vision to navigate change, accommodate ambiguity, surmount complexity, and motivate teams in a common purpose to make a difference in the world, and have an impact on organizations of all sizes and types. As we have for nearly a half-century, Babson continues to advance Entrepreneurial Thought and Action® ​as the most positive force on the planet for generating sustainable economic and social value.

Thank you to @CharlieBakerMA, @babson alum @repnickcollins and everyone at the State House for hosting us and honoring our season! #GoBabo pic.twitter.com/PTazBRPmMx