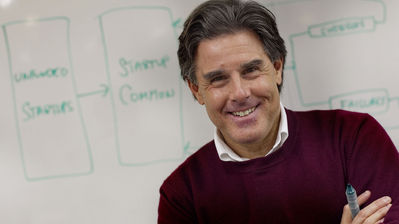 Peter Cohan teaches strategy and entrepreneurship to undergraduate and MBA students including courses such as Strategic Problem Solving and Strategic Decision Making. He also developed and teaches Foundations of Entrepreneurial Management for undergraduate transfer students.

Cohan joined Babson in May 2002, as an executive-in-residence, advising teams in their consulting work with companies through Management Consulting Field Experience (MCFE) programs.

In June 2016, he was promoted to a full-time Lecturer of Strategy. And in August 2022, Babson appointed him an Associate Professor of Management Practice.

He created and led the Hong Kong/Shenzhen Start-up Strategy Offshore elective for MBA students and taught the Strategy and the CEO capstone in the evening MBA program. For the Master of Science in Entrepreneurial Leadership (MSEL) program he created and teaches the Global Entrepreneurship Experience -- Israel course. He also created and teaches Strategic Transformation in Babson's Master of Science in Advanced Entrepreneurial Leadership (MSAEL) Program. For undergraduates, he created and runs the Paris, Israel and Portugal/Spain Start-up Strategy Offshore electives. In May 2020, he launched an undergraduate elective -- The Israel Startup Ecosystem.

In February 2021, he was appointed a Member of the Faculty Board of Advisors at Babson's Butler Institute for Free Enterprise through Entrepreneurship.

Cohan began his career at Index Systems, a management consulting firm founded by several MIT professors. While there he worked with James A. Champy, co-author (with former MIT professor, Michael Hammer) of Reengineering the Corporation (HarperBusiness, 1993). Following business school, Cohan worked at The Monitor Company, a strategy consulting firm co-founded by Harvard Business School professor Michael E. Porter. Cohan then worked in strategic planning at Bank of Boston and in the Finance Department of Liberty Mutual.

His venture capital business has invested in seven companies including Andromedia, an Internet software company, which Macromedia purchased in 1999 for $440 million; SupplierMarket.com, an online marketplace for industrial supplies, which Ariba purchased in 2000 for $930 million; and Lexar Media, a digital media company that was sold in 2006 to Micron Technology (MU) for $690 million.

In December 2014, he invested in Social Finance, a peer-to-peer lending company in San Francisco, which went public in June 2021 at a valuation of $18 billion billion in a merger with Social Capital Hedosophia Corp V, a publicly-traded Special Purpose Acquisition Company (SPAC).

Cohan has authored 16 books and contributed to six management compendiums. His most recent book is Goliath Strikes Back: How Traditional Retailers Are Winning Back Customers from Ecommerce Startups (Apress, December 2020). Prior to that he authored Scaling Your Startup: Mastering the Four Stages from Idea to $10 billion; (Apress, February 2019). Startup Cities: Why Only a Few Cities Dominate the Global Startup Scene and What the Rest Should Do About It (Apress, February 2018); Disciplined Growth Strategies: Insights from the Growth Trajectories of Successful and Unsuccessful Companies (Apress, February 2017) and Hungry Start-Up Strategy: Creating New Ventures with Limited Resources and Unlimited Vision (Berrett-Koehler, November 2012).

His other books include Export Now: Five Keys to Entering New Markets (Wiley, September 2011) co-authored with Frank Lavin; Capital Rising: How Capital Flows Are Changing Business Systems All Over the World (Palgrave-Macmillan, June 2010) co-authored with U. Srinivasa Rangan; You Can't Order Change: Lessons from Jim McNerney's Turnaround at Boeing (Portfolio, 2009); Value Leadership: The Seven Principles That Drive Corporate Value in Any Economy (Jossey-Bass, 2003); e-Stocks: Finding the Hidden Blue Chips Among the Internet Impostors (HarperBusiness, 2001); e-Profit: High Payoff Strategies for Capturing the E-Commerce Edge (AMACOM, 2000); Net Profit: How to Invest and Compete in the Real World of Internet Business (Jossey-Bass, 1999); and The Technology Leaders: How America's Most Profitable High Tech Companies Innovate Their Way to Success (Jossey-Bass, 1997).

Cohan serves on the Babson faculty senate and as coordinator for Strategic Problem Solving, the required capstone strategy course for undergraduates. He also served on the small business subcommittee of President Joe Biden's Economic Policy Committee.

He has spoken at MIT's Sloan School 2020 Retail Conference, Stanford University's Forum for American/Chinese Exchange (FACES) and taught in its Industry Thought Leaders program, Columbia University's Senior Executive Program, as the Verizon Visiting Professor in Business Ethics at Bentley University, as a visiting professor at EADA in Barcelona, at the University of Hong Kong, the University of Monterrey in Mexico, Tel Aviv University, School of Management Fribourg (Switzerland) and other universities in Europe and Asia. He has also conducted management development programs in the US and Asia sponsored by leading corporations, such as IBM, Intel, Hewlett Packard, Oracle, Fidelity Investments, and Procter & Gamble.

Cohan also appeared in the 2016 movie, We the People: The Market Basket Effect.