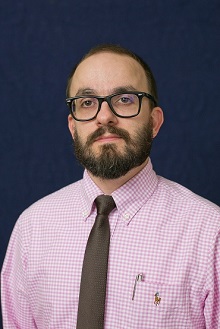 Stephen J. McElroy is Assistant Professor of Rhetoric and Composition and Director of First-Year Writing. He specializes in composition theory and pedagogy, multimodal production, digital composing, and assemblage theory. His work has appeared in Computers and Composition, Kairos, and Enculturation, among other venues. His 2017 collection, Assembling Composition, co-edited with Kathleen Blake Yancey and published in the Studies in Writing and Rhetoric series by NCTE, examines the relationship between assemblage and composing in theory, in the classroom, and in the world. For his 2014 Kairos article, he and his coauthors Michael Neal and Katherine Bridgman received the Computers and Composition Michelle Kendrick Outstanding Digital Production/Scholarship Award.
Before joining Babson, Stephen directed the Reading-Writing Center and Digital Studio at Florida State University, where he previously earned his PhD, and taught courses in FSU's Editing, Writing, and Media major and College Composition program. He also holds an M.A. in English from Belmont University and a B.S. in Computer Information Systems from the Gordon Ford College of Business at Western Kentucky University.