On Thursday, November 9, 2017, C. Dean Metropoulos, chairman and CEO of Metropoulos & Co., was inducted as a new member.

We honored the outstanding business achievements of C. Dean Metropoulos ’67, MBA’68, who earned his BS and MBA from Babson. He has been involved in more than 80 acquisitions during the past 30 years, and has earned some of the most attractive returns on Wall Street. Highly respected for his integrity and commitment, he is a sought-after partner by many major private equity firms and international investors. 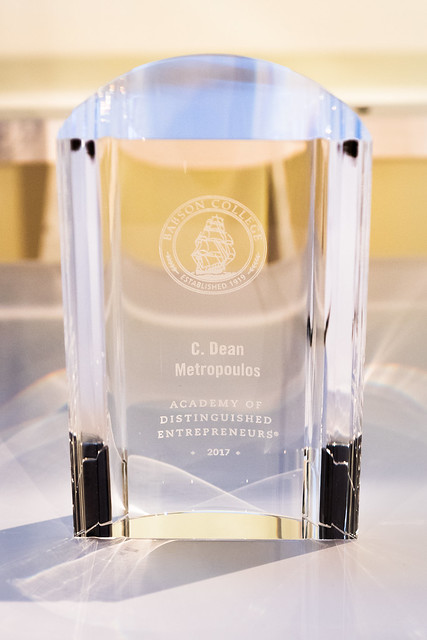 About the Academy of Distinguished Entrepreneurs

Since its inception, the academy has recognized and honored entrepreneurs who have contributed significantly to the development of free enterprise throughout the world.

Nominations of world-class entrepreneurs who have created great economic and social value are solicited from the Babson community as well as from outside the institution. Through the years, Babson has celebrated entrepreneurs of all kinds as illustrated by the impressive list of inductees. Collectively, the 110 members of the academy have created millions of jobs and improved societies around the world.

Many of the most successful and visible entrepreneurs in the world are members of the academy. They represent companies that are some of the most highly regarded in their industry and household icons in their culture. These members have capitalized on the need for change, accepted the associated risk and responsibility, and made an impact on the world. The energy and innovation embodied by these individuals will be appreciated and applauded for many generations to come.

Read “Twinkie’s Miracle Comeback: The Untold, Inside Story of a $2 Billion Feast” on Forbes.com to learn more about C. Dean Metropoulos ’67, MBA’68 »